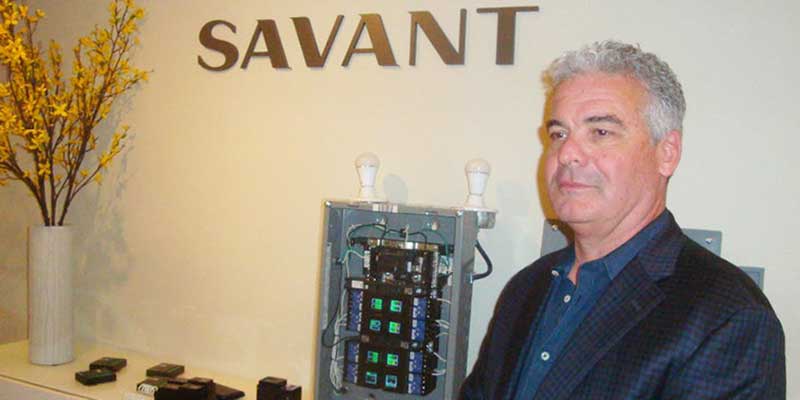 In a wide-ranging and candid interview, Savant CEO Bob Madonna laid out the company’s market focus going forth, discussed numerous new product initiatives, addressed about rumors swirling about the company in the blogosphere, and admitted some missteps that have been rectified.

Meeting in Savant’s Hyannis headquarters, Madonna explained with refreshing openness why he returned four months ago as CEO to the company he founded, taking over for William Lynch, the former Barnes & Noble executive who headed the company for the past two-and-a-half years.

“I decided to come back in for a number of reasons. Number one was that I was concerned about the focus being taken off of the luxury side too much. It was time for me to come back and redirect some of the technology focus back to luxury. We are revamping the luxury line with a number of new product lines,” explains Madonna. “Savant wants to be the first out with technologies again… like it was with HDMI switching, integration with iPads and iPhones, etc. We prided ourselves on not only being first but also having the highest quality. We need to re-establish ourselves as being first in the market again.”

“William did a great job establishing this brand name among consumers. That is why I brought him in,” says Madonna. “It was important for us to establish the brand more among the masses, which is what we did.”
He admits in hindsight that the company was too aggressive in its pursuit of establishing a consumer presence.

“The vision was to take what we have done in luxury and try to get it into a larger audience, establishing Savant as a consumer brand that would help bring more business in to the luxury market. That was the theory,” he says.
But Madonna says the consumer market is still fixated on single-point solutions versus a centralized control system.

“The consumer space has changed… it is not what we expected it to be three years ago. We thought the market would evolve to the point where you would need a central controller, but that is not what happened. It is a confused market space. You’ve got point solutions everywhere. You have apps everywhere. It is craziness,” he says.

“We found that once consumers got through the setup, they loved the user experience. But it was difficult for them to get through the setup. It needs some type of professional installer. I don’t think anyone has a product that is fully DIY. It has to be a combination of DIY and Do-It-For-Me on some level to attain all the features. It is even more complicated than ever now with the cloud. I call it the cloud jam because everyone has their own protocol and they are all talking to each other,” says Madonna.

Now, Savant is laser-focused back on the custom channel. “We did lose our luxury focus,” admits Madonna, noting that the company devoted a lot of engineering manpower to building out the 1.x remote software that is sold in Best Buy Design Center and Magnolia Home Theater. “It takes a lot to build a piece of software. But it took so much energy and focus and it took some of the focus away from building luxury products. It was not by design; it was by accident. Some of it just had to do with the size of the company; some of it was because building a cloud infrastructure is a big job. This was about biting off too much and bringing something out too soon that the market wasn’t ready for.”

“We cannot take our focus off of our professional integrator channel… at all. Period. And we will not do that again,” he says emphatically.

Addressing Rumors on Layoffs, Company Sale
Madonna also took time to frankly address some of the rumors in the market regarding Savant. Soon after he returned to the helm, Savant combined its consumer and professional sales forces in to one.

“The only layoffs were in the consumer sales channel. It was necessary to do given our refocus. Did we have layoffs? Yes. All my competitors have had layoffs. It happens,” he says.
Meanwhile, the engineering team has been beefed up. Madonna combined the cloud infrastructure engineering teams of Savant and its sister company Racepoint Energy, which is the company Madonna formed three years ago when he handed over the reins of Savant to Lynch. He notes that “it didn’t make sense for both companies to be working on the same thing.”

In the end, the Racepoint Energy engineering team absorbed the Savant cloud engineering team that was based in San Francisco. Today, Madonna estimates the company now has between 80 and 90 engineers.
Another rumor he tackled head on was that Savant shut down its Experience Center in NYC.

“Totally not true. Total lie,” he says. “There was a group there who was using it as an office that made no sense. All that space we were using to show off consumer-grade products was being used as office space, so I reset that. The Experience Center is open and is actually getting a whole new facelift with all our new products.”

Another rumor that surfaced that Savant itself was up for sale.

“A total lie,” he says. “I came back here to rebuild this professional service. I would not be wasting my time if the company was in trouble. I had to reset it and do some restructuring in sales. That is a hiccup. I am not here to sell this company. Period. I would not be wasting my time if I was going to sell this company. There is no way I am selling this company. This company is going to be No. 1 in the luxury space and will be the most progressive company pushing automation in the right places, but not as fast and as quickly as we were doing it. That is where we stumbled a little.”

He continues, “Between the cloud, the UI and the consumer focus, William [Lynch] built a lot of the pieces that this company needs. We are just going to apply them slightly differently at a more conservative pace.”

Aggressive New Product Roadmap
At Savant’s recent dealer conference in Denver, which drew 600 authorized integrators, Madonna says the group was re-energized. “[The conference was the] best one we have ever put on. So many dealers came up to me thanking me for coming back. I almost felt like a rock star,” comments Madonna.

The reason for all the excitement is the slate of new products that the company is rolling out over the next several months, all of them focused on the luxury professional installation space. CE Pro will cover each of these debuts in more depth as they hit the market.

The products, some of which still do not even have official model names yet, include:

Ultra HD over IP 4K switcher – The first product to hit the market is a new 4K/60 4:4:4 HDR video distribution over IP switcher with 0 frame latency. The unit’s centralized 10GbE switch enables Ethernet connectivity throughout a project, with both fiber and copper options.

Automated Shades – Savant has made its first foray into the shade control business with a Savant Shades. The sleek units do not hide the shade in a clunky box but instead reveal the rolled-up shade. Madonna believes shades are an important aspect to energy control, which is a focus of the company.

Touchpanel Thermostat – Available in Q2 2017, a new Savant thermostat is will hit the market. The unique aspect of the t-stat is that it can double as a whole-house controller because its touch interface is identical to the UI in the Savant remote.

Wally Touchpanel – The Big Wally and Little Wally dedicated touchpanels will also hit the market in Q2. These touchpanels fit into a single-gang box and also use the identical interface as the Savant Remote.

Door Entry System – Targeted at MDUs, the Savant door entry system connects to the cloud with a camera and touchscreen.

Racepoint Energy – Working with its sister company, Savant integrators will be able to offer smart electrical energy that enables the homeowner to see exactly which circuits in the home are utilizing how much power. Racepoint itself focuses on nanogrids and microgrids for renewable energy for residential and commercial.

Smart Bulb – Hand in hand with its focus on energy management, the company will be releasing a smart bulb with Bluetooth connectivity and the ability to change colors and brightness levels.

Metro Wireless Tabletop Controller – Grown out of the company’s Litetouch acquisition several years ago, a new battery-powered tabletop controller for its Metro Wireless lighting control is on tap.

Wi-Fi Remote – The Savant Remote, which was previously solely Bluetooth, will now have a companion model with Wi-Fi capability. The existing 8.x remote will stay on the market at a $500 price point while the Wi-Fi version will be $800.

“These are pretty exciting products we have put together,” adds Madonna humbly.