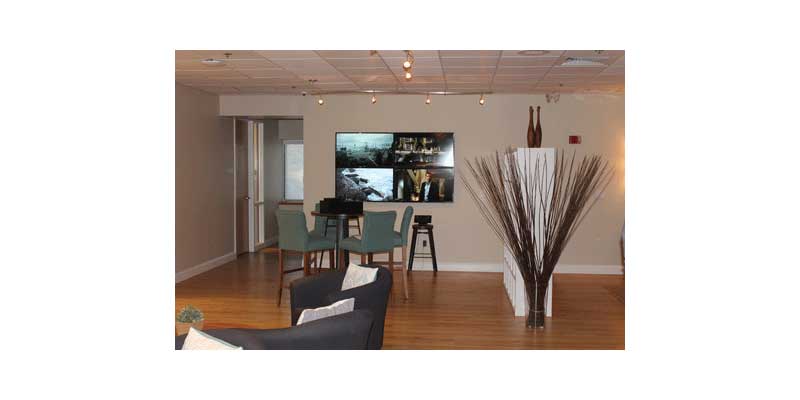 Last week, Savant released details about its new 4K60 4:4:4 HDR video distribution system, the company’s first major product announcement since founder Robert Madonna returned as CEO in October. The product represents a renewed focus by Madonna and his engineering team on the luxury home technology category and professional dealers—a focus he acknowledges was diluted over the past three years as Savant developed a bit more of a consumer-facing agenda.

Bob Madonna next to a demo panel
And the 4K distribution system is only one of several products, including Alexa voice integration and a new lighting and shades line, and a partnership with a sister company focused exclusively on home energy management, that Madonna’s team unveiled to more than 600 attendees at its late-January dealer event and last week to select trade press at the company’s Cape Cod headquarters.
More details will be available on each of these products as they are officially released to the media, but Madonna provided a brief overview of what’s to come during our headquarters visit.
Before diving into the new products, Madonna noted that the primary motivation for his return to Savant was to develop “luxury-level” products that had taken a back seat to other important projects in the company over the last three years.
“I came back because I was concerned about the focus,” Madonna said. “We had taken too much [attention] away from the luxury side.”
Madonna quickly clarified, however, that his handpicked successor (and now predecessor) William Lynch, the former Barnes & Noble CEO and designer of the Nook e-reader, had successfully achieved the consumer product-centric goals that he (Madonna) had hired him to achieve.
“William did a great job on user experience and the elegance of the remote and apps,” Madonna noted. “Those are still here and are such important assets. William [also] built the top cloud infrastructure in the marketplace. We have a battleship of a cloud now, and it’s so important to the future that you be cloud-based.”

Savant Showroom Wall With so many resources aimed at developing that new UI, remote control, and cloud infrastructure, the luxury side of the business was slowed considerably.
“One of the issues is that it takes a lot to build a piece of software,” Madonna said. “It takes so much energy that it pulls from other areas. Some of that has to do with the size of the company. We cannot take our focus off of our professional integrator channel at all, period. It wasn’t designed to be that [way.] It just happened.”
The company is now looking to combine what Lynch accomplished in user experience with the engineering of luxury products to achieve technical challenges.
For its first release, Savant is leveraging the experience that Madonna and his veteran engineers amassed from their time in the telecom industry (at Excel Switching), before starting Savant, when they created one of the first products moving away from traditional telecomm by switching to voice over IP.
“It’s uncanny that the exact same evolution is going on,” Madonna said. “You look at our Pro Audio 4 product, it’s distributed video over IP in the house. It’s no longer centrally switched; it’s exactly what we did in telecom with voice over IP. Now we’re also doing that with video over IP. That’s what we know how to do and are very good at.”

Savant controls interface with the Amazon Echo The 4K-over-IP product offers home tech pros the convenience of a centralized 10GbE switch, enabling Ethernet connectivity throughout the project with both fiber and copper options. A transmit chassis for centralized sources and distributed receivers has been designed with ease of installation in mind, reducing the burden and complexity at the rack. Audio down-mixing capabilities and audio breakout options make the new switching platform match up with Savant’s Pro Audio 4 IP-based switch with unlimited audio zone support and access to all popular streaming services via Savant Music. The platform scales for installations from two to 128 zones or more, and advanced video processing features include multi-video/video tiling, video wall, and multi-switching applications.
Also in the pipeline for beta testing and release to dealers over the next two quarters is Savant’s first Alexa voice interface module, as well as products from the company’s new licensing partnership with Racepoint Energy, a company that Madonna launched during his time away from Savant. The start-up was inspired by Madonna’s interest in renewable energy and a specific project involving the installation of a 48-kilowatt solar panel array on his new home. Madonna found that the batteries used to store the energy generated by solar panels left him with a fluctuating energy source. He wanted to figure out a consistent way to monitor battery strength and to track how much energy he was using versus how much was being stored, then to dynamically change those critical loads.
The resulting product, called the Smart Breaker Companion, fits into a standard Schneider Electric panel. In the prototype model in the company’s Hyannis showroom, two dimming circuits also controlled the lighting in the room relative to energy consumption, but you could also use the modules to control lighting for home automation, according to Madonna. The modules are designed to dim adaptive phase, forward phase circuit, and pure sine wave loads.
“We can make pure sine wave to make dimming noiseless,” Madonna said.
The system also works hand in hand with Savant’s low-voltage Metro Wi-Fi-based dimmers, a line that now also includes new battery-powered tabletop models. The modules within the Racepoint panel are meshed together via Bluetooth, because you can’t have low-voltage cabling inside a high-voltage box, but the unit communicates via Wi-Fi to the company’s new thermostat, which serves as the room’s controller.

Savant Thermostat Savant’s new thermostat features a full-color touchscreen that can run scenes just like the Savant Remote and includes the company’s Host control software embedded inside. The idea is that you can have a room where a thermostat has to be located, but you don’t want the added expense or wall clutter of an additional interface. “This means you could sell an entry-level system by starting just with this thermostat,” Madonna said.
Also on the product roadmap are Savant-branded Bluetooth light bulbs that can mesh together to create a system of dimmable, color-changing lights. The company continues to support Philips Hue, as well.
The company also has created its first window shades line, which is an OEM’d collection of various materials and options tying in with Savant’s new energy management plans.

Bob Madonna demo’s Savants latest touchscreens In its early history, Savant offered a proprietary in-wall touchscreen, but later scrapped it in favor of iOS devices. Now the company has come full circle by adding two different single-gang touchpanels that mimic both its new thermostat and Remote interfaces. There are two models in the Wally line: both are single-gang, one a 2.9-inch version and the other a 5.5-inch version that overlaps onto the wall. Each model will feature a pair of hard buttons to meet electrical codes for emergency responders or for quick access to volume control or light dimming.
Savant has supported door-entry systems in the past, but that feature was not included in the 8.x app used to program its new Savant Remote. Now that omission has been remedied, so an end user can access a video camera feed from the front door on any control interface, unlock the door, turn the porch light on, accept the ring, and talk to the person at the door, and store ring information and stored video streams in the cloud.

Savant Tabletop Controls
“This company has been very hard at work for the last three to four months. Very hard,” Madonna said when asked if all of these products were created since his return. “We’ve been redirecting, refocusing, and really coming out with some great products.”