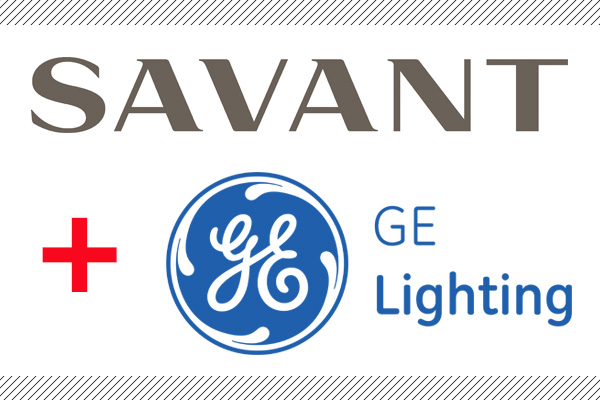 The industry woke to some big news yesterday morning when Savant announced its plans to acquire GE Lighting. This is the third lighting acquisition that Savant has made — first with LiteTouch in 2012, then NOON in January of this year, and now GE Lighting. It may seem an odd fit with GE Lighting being a larger, public, mass market company, but, according to Savant president JC Murphy, that’s exactly why the two work so well together.
“Lighting has been on our mind for a long time,” says Murphy. “With the addition of GE Lighting, we have gone a long way to cultivate the lighting portion of our strategy where we can pull in their great lighting assets, outstanding management team, and an iconic brand all in one fell swoop. It is a really big transformational move.
“The thinking behind it was because we needed a large catalyst to move the industry to this idea of smart, healthy living, and the need to build a company that could provide that from all aspects of the ecosystem. Savant could have done that over a long period of time with a lot of effort, but, by working with the GE team, we realized that their iconic legacy and ability to scale in terms of their operational proficiency, manufacturing cost, and core management DNA combined with our capability — it was a nice marriage; two companies that can bring a lot to the table for each other.”
Through the deal, Savant will acquire GE Lighting’s intellectual property, their employees, a couple of factories, and a long-term licensing agreement. “We also have the rights to a brand used on their smart lighting called ‘C by GE’ and also a brand called ‘GE Smart Home,’ which is not being used anywhere today. That was very appealing to us, and the team worked very hard to secure that as part of the transaction. We could, for example, combine a number of different technologies under that brand and offer a complete solution for a building.”
Despite both company’s involvement in residential lighting, Murphy maintains that there was no overlap between the two companies. “Savant has a mid- and high-end lighting solutions, including a Wi-Fi-based lighting solution that scales up to a structured wired lighting solution with our companion breaker modules,” he says. “The C by GE smart lighting is the entry-level Bluetooth/Wi-Fi mesh solution that we were missing. It’s a perfect technology fit.”
After the news was announced yesterday morning, Savant held calls with their employees and advisory council, which is made up of dealers all across the country. According to Murphy, “They were very engaged and very interested in how we can leverage the Savant brand on different kinds of products and increase its awareness. It’s going to be helpful to not only work with the lighting customer base, but also the integrators on the best approach on branding.”
Savant’s partners in USAI were also enthusiastic, with the hope that the awareness the acquisition brings will lead to more lighting control systems sold and more fixtures that can get deployed along with it.
So when can the channel expect to see the fruits of this deal? “There is usually a 9-to 12-month cycle for a new product,” says Murphy. “But first, Bob [Savant founder and CEO Robert Madonna] has directed our collective teams to focus on the people in both companies and then focus on the brand. We want to make sure we understand what each of us are doing to run our day-to-day operations. Then the outflow of that will be several different groups focusing on our positive synergies.
“For example, we know that GE is amazing relative to manufacturing and operations — they’ve been doing it for 70 years at volume and scale. They have their own factory. So their ability to take Savant product and cost-reduce it and build it in volume is second to none. What that means for the CI channel is even better-quality product at better margins and better price points.”
And while it is a welcome change to be talking about a business growing and new ventures, Savant is painfully aware of the current situation the integration industry is in due to the pandemic, and stresses that this was a long-term play that started around January 2019, well before COVID-19 was on anyone’s radar. Still, toward that end, Savant is helping their dealers where they can with online training programs, making it easier for dealers to deploy remote technology, and donating to the COVID Relief Fund.
“We’re very cognizant of the trials and tribulations folks are going through relative to the virus,” concludes Murphy, “and we all believe that our country — and the custom install industry — will get through this pandemic.”